The Beginning After The End Wiki
Register
Don't have an account?
Sign In
Advertisement
in: Characters, Elves, Male,
and 2 more

Feyrith Ivsaar III is a noble elf belonging to the Ivsaar House that Arthur meets as a child in the Kingdom of Elenoir and later sees again at Xyrus Academy. While attending his first year at Xyrus Academy, he is chosen to be a part of the Disciplinary Committee and takes Practical Mana Manipulation class alongside Arthur and Kathyln.

Feyrith initially appears as a spoiled and immature elf who looked down on humans. However, during his schooling at Xyrus Academy, he seems to have grown as a person and rarely looks down on humans or elves.

Feyrith is an elf and a few years older than Arthur.[4] He is tall, being a head taller than Arthur, and has pretty boy features. Feyrith has blonde, shoulder-length hair and long bangs that fall between his eyes. Like many elves, he has pointed ears. In the novel, Feyrith is described as having green eyes,[5] while depicted having brown eyes in the comic.

During his attendance at Xyrus Academy, Feyrith wears the standard black uniform of the Disciplinary Committee. In the novel, his uniform consists of completely black attire with gold stripes on his shoulders.[4] In the comic, his uniform is black with gold trimmings embellishing his military-style uniform accompanied by a belt over his dress coat and brown, below-the-knee boots.[6]

Feyrith initially appeared as a spoiled and immature elf who looked down on humans. He harbors animosity towards Arthur for being a human and a disciple of Virion and Tessia's companion;[2] he later deems Arthur as his rival. Feyrith often acted cocky, appearing confident in his actions. He may appear well-mannered, but his voice has a slight tone of arrogance. Feyrith is prideful, not wanting to admit his fear by making excuses for his defeat. Unlike others, Kathyln noted that Feyrith is not emotionally strong compared to the others, as he appeared dispirited when the Tri-Union Hall, a symbol of the unification of the three races, was burned down. Seeing the hate towards his race, Feyrith feels dispirited.[7]

Feyrith belongs to the noble house of Ivsaar. He met Arthur during Arthur's first few days in the Kingdom of Elenoir. Arthur accidentally bumped into him when Tessia took Arthur to go sightseeing. Feyrith took serious offense in Arthur, a human mage, being a disciple of Virion and Tessia's companion. He offered to escort Tessia in place of Arthur, which Tessia refused. Feyrith challenged Arthur into a duel, who caught Feyrith off guard and defeated him instantly.[2]

Three years later, Feyrith and his sister went to Xyrus City as the elf representatives, participating in the interracial tournament. He and his sister placed in the top five in the trial competitions.[8] Feyrith entered Xyrus Academy as a first-year and became part of the Disciplinary Committee.[4] He took Practical Mana Manipulation classes with Arthur and Kathyln.[3] On his first day in Practical Mana Manipulation class, Professor Geist humiliated Feyrith in a class demonstration, causing Kathyln and Arthur to participate in the demonstration. After Arthur replaced Geist as the professor, Arthur taught Feyrith how to reabsorb spells.

Warning! The following information are novel spoilers that have not been covered in The Beginning After The End Webcomic. Click on "Expand" if you wish to read.

During the attack on Xryus Academy, he was assaulted and kidnapped by the radicals alongside Doradrea and Tessia. The radicals were led by Draneeve and his group, along with Kai and Lucas. After the attack, Feyrith sustained heavy injuries and was taken back home.[9]

After the war with Alacrya, the Alacryans captured Feyrith and he became a slave. During a rescue mission, Tessia's group managed to rescue Feyrith and other elven slaves. He informed Tessia that the Alacryan forces had taken over the village of Eidelholm, with a few hundred enslaved elves that needed to be rescued.[5]

As an elf and a noble, Feyrtih initially looked down on Arthur for being a human. At first, Feyrith appeared jealous of Arthur for being Tessia's companion and Virion's disciple. In retaliation to his offensive attitude, Arthur mocked Feyrith by calling him "Lord Genius of the Elves" in the novel and "The Feyrith Ivysaur"[10] in the comic. In frustration, Feyrith started a duel with Arthur, not knowing that Arthur was not aware of dueling customs.[2] Arthur later learned of Feyrith's nickname on their way to Xyrus City, causing Arthur to refer to Feyrith as Feyfey to Feyrith's embarrassment.[11]

During Feyrith's first year at Xyrus Academy, he and Arthur were both members of the Disciplinary Committee. Feyrith often proclaims Arthur as his rival but is also aware of his shortcomings to Arthur's capabilities as a mage and a fighter. On one of their Disciplinary Committee meeting, Feyrith greeted Arthur, calling Arthur his rival and mentioning the postponement of their duel. He brought up that he wanted Arthur to recover first from his injuries when, in fact, he is afraid to duel him, aware of his own weakness.[12] Despite Feyrith's initial hostility towards Arthur in the beginning, Feyrith cares for Arthur. When Arthur revealed that he became the new professor for the Practical Mana Manipulation class, one of the students tried to attack him. In the novel, Feyrith stood up, about to jump on the stage to stop the student, but Arthur motioned to Feyrith that he can handle the situation.[13] Likewise, Arthur does not hold a grudge against Feyrith's earlier actions. After getting defeated by Professor Geist, Arthur reassured Feyrith that he did well.[3]

As an elf belonging to a noble family, Feyrith has been acquainted with Tessia since their youth. He regards Tessia with high respect as the princess of their kingdom. During Feyrith's first encounter with Arthur, Feyrith offered to escort Tessia instead of Arthur, believing that a human was not worthy of escorting the princess. Tessia ignored Feyrith and disregarded him like a bug that would dirty her shoes. When Feyrith initiated a duel with Arthur, Tessia was upset at his action, stating that he showed disrespect towards Virion's disciple.[2] Tessia considered Feyrith as a "noble brat" for his actions against Arthur.[8] Despite attending Xyrus Academy together, Feyrith and Tessia has little interaction during their time at school.

Feyrith first met Kathyln at Xyrus Academy as a fellow Disciplinary Committee member. They also took Practical Manipulation class together with Arthur. Being in the same committee, Kathyln respects Feyrith as a comrade. After Professor Geist defeated Feyrith in a class demonstration, Kathyln volunteered to fight Professor Geist.[3] After the class, Kathyln stormed Director Goodsky's office for Professor Geist's misconduct of picking on students, including humiliating Feyrith.[14]

As a water attribute conjurer, Feyrith can conjure long-range water spells towards his target.

Feyrith has above average skills, being able to place top five in the trial tournament[8] and being chosen as a member of the Disciplinary Committee, which only accepts students based on their strength. In Practical Mana Manipulation class, Feyrith was second to Kathyln in successfully reabsorbing spells.[15]

Feyrith introducing himself to Arthur.[1]

Feyrith initiates a duel with Arthur.[1] 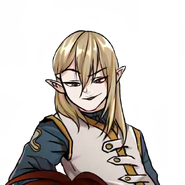 Feyrith on his way to the interracial tournament.[17] 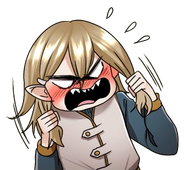 Feyrith in the Disciplinary Committee.[6]

Feyrith conjuring a spell with his wand.[18]

Community content is available under CC-BY-SA unless otherwise noted.
Advertisement